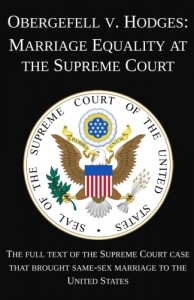 A case which will cause controversy for years to come, Obergefell v. Hodges was the U.S. Supreme Court case that declared same-sex marriage the law of the land. This edition of the full text of the Court’s ruling, written by Justice Anthony Kennedy, also includes all four dissents, written by Chief Justice Roberts, Justice Scalia, Justice Thomas, and Justice Alito. This edition has parallel citation pages, in addition to the original slip opinion pages, to assist the reader with following each Justice’s references to other Justices’ sections.